This work was done in 1974 as enameled copper plates. They represent a power confrontation between the sexes. The woman's fetus has no hands and feet due to pharmacological interventions (thalidomide). Her breasts are armored and her hand wants to protect the child against male aggression and technology.
The man has a mechanical heart, holds in his hand the Orb, symbol of Christianity, which can imply the historical devaluation of women fostered by male-empowered religious values and customs.
The three penises were not due to a Freudian slip. As I was working with tracing paper on the floor, three tracings of a single penis shifted and suddenly I saw three penises instead of one. The image was much more powerful due to its more prominent size and its relation to the female counterpart. That was it!
At the first exhibition of the artwork in Chicago in 1974, I heard a man ask the question to his wife, "What is he going to do with the other two?" I almost cracked up because I was standing right behind him.
Some thirty-five years later, since I still owned the artwork, I told my friend about the spectator's comment. She looked at the artwork and nonchalantly replied, "He is going to use them as spares!"
We laughed, we both were thinking about the enormity of the male ego identification with his sexual tool!...........If you, a male, are reading this what would your response be? 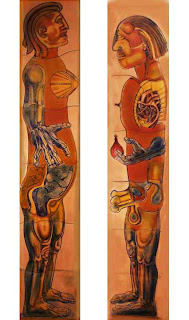 Posted by Fiammetta Rubin N.D. at 9:38 AM No comments:

About GOD for Deborah 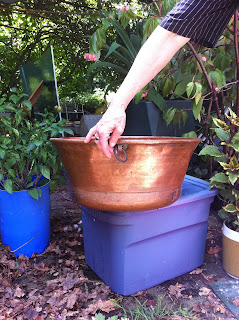 *This is an original copper cauldron used to prepare the one meal for a family. It hung from two rings over the hearth. It was no longer used after WWII when unions came into existence in Italy after 1946.
Posted by Fiammetta Rubin N.D. at 10:02 AM No comments:

Experience About a Victim of the Papal Inquisition of the Cathars 1209 A.D. Carcasonne


As usual, I stopped by the usher of the cinema; I call him the “old Man”. We do not remember one another’s names. No matter. When I leave the screen room I remark about my thoughts about the movie. We share opinions, we laugh. We have good humor together.
This time I said; it was very good. I am going home now to write about something that happened in the thirteenth century in France!”  Ha laughed. I knew, last time he had remarked that there is nothing new.  For the Pope it was really about politics. For the King of France it was about land. There was no oil at that time!… that one knew of…
My story begins with a trip that my husband and I took to the medieval city of Carcassonne, on the edge of the Pyrenees Mountains, on the border of Spain and France.  My aunt Trude had been there and remarked how beautiful it was. Not quite as original as one would think. A 19th century architect Viollet le Duc had literally had it reconstructed from the bottom up.  The style was genuine, but the actual stones were not.
It is situated at t6he apex of a hill. Below was and still is the town, now a rather prosaic town with trees flanked by planted trees that had been cropped almost to a stump. Would they grow back? They probably did this to them every year. Why, I did not know. It certainly lessened the shade in this use the local pay phone once we arrived, to call them. They would send their own cab and get us off at the hotel. No public transportation was allowed in this steep streeted and walled city.
All was fine and good. We get off the city cab, call the hotel and wait by the pay phone.
As I recall, I had sat for a long time, but felt very tired. There was a marble stone and I sat on it waiting.
Sleep had been good in Paris, why be depressed.?…. It would leave. But there were tears in my eyes. I wiped them. There was no dust, just sadness.
History had never quite been my favorite read of choice, but my husband is a historian and with his astounding historical mnemonics, is capable of remembering to the year what had happened in the places that he visits. He must have time warp videos in his brain.
No, I had seen pictures of the round turrets with cone like roofs, but did not know the history, nor was I interested in it.
The train took us from Paris to Carcassone. There must have been a change, but I do not remember. It was in the early nineties.
The ride had been   non descript. We got off the train and Jim knew that we had to call the hotel They told us to get a cab at the station and to call them at the pay phone once we were at the city walls. We did and waited.  There was a large chunk of marble and I sat on it, exhausted, depleted of energy, although the train ride had been good and the night in Paris had been also.
Tears welled in my eyes. I was annoyed. No reason to feel sad or cry. It was a beautiful warm day and the walled city looked fascinating.
The car of the Best Western Hotel arrived, loaded the luggage and us, zipped under the city gate and quickly unloaded us at the hotel’s   door. Quite unremarkable, like an American Hotel.
Checked the passports, got the room key and up the stairs we went. As soon as the door closed I sat on the bed staring at the wall.  I felt totally exhausted, empty, as though any form of interest in life had left me… Hopelessness had invested me and I started crying helplessly… Jim watched but did not know how to react or what to do.
I was spent. One part of me was crying desolately and the other half was watching me wondering what had come over me.
Jim cut the impasse by saying;’  Do you know what happened in this town?’
I looked at him:  "What does that have to do with me and how I feel now?”… He looked at me in his curious way, then I know that he has a big clue, hidden like an ace up his sleeve.”  It was a long time ago, in the thirteenth century…”
‘ Now I was curious and mad at myself for allowing this horrible feeling to take over.’ What happened here?”
“ Two thousand people were run out of town and burned by the Inquisition and the French forces. It was part of the Albigiensan Crusades.
There was nothing I could say.  Ok.”  They were all burned”.  At that point I even felt worse, but was fighting against it.”
“Look, let’s go out to a restaurant. I am sure you will feel better after you have some food in your stomach. I certainly can eat”.