There are no sinners and there are no saints. There are only humans beset by fear, inwardly or outwardly.
There is a phenomena explicitly created by the psychic surgeons in Brazil, Philippines (see photo of surgery below) and elsewhere, through which they can also enhance the patients’ placebo effect created by the persons’ mind, as the patients witness an almost numinous phenomenon. Besides the healing phenomena, in relation to the mindset of the patients involved, it is also possible that they might have fear in these unusual circumstances and instead of the placebo (healing) effect, there could also occur a "noxibo effect” (destructive effect)," which might in itself increase the patients' fear, thus depressing their immune system and making them feel worse. We witness such an effect in the Caribbeans by the practice of voodoo.
It is my belief that the presumptive "healers" jumpstart the immune response through the sudden shock of belief overcoming the patient. For example, the more knives, more cuts, more instant closing of wounds, more blood flow the better! 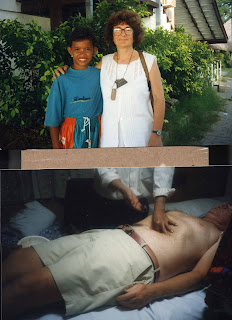 The author with Miguel (top)
Alex Orbito doing surgery on the abdomen of “x.” Photo taken by Fiammetta Rubin, Philippines 1995.

[For more information about paranormal phenomena, search on google for "Towards a Science of Consciousness" May 3-7. Stockholm, Sweden 2011. Search fro Fiammetta Rubin, number 30 concurrent presenter. "The art of conscious tunneling through the microtubules of the mind (about psychic phenomena)."]

Whatever the healing effect sought by the healer consciously or unconsciously, or both, creating a “psychokinetic phenomena" shall not wane after a few months at most, unless the patient changes his or her life modality.
Changes in nutrition, spiritual beliefs, emotional burdens, and other habits that contributed to the illness in the first place are required to upgrade his or her own mind-set, or not only will the patients not heal but they may worsen.
Also, let us not forget that the “feeling” of believing in an extraordinary event related by God Himself is very powerful. The agent of such healing also feels chosen to be God’s agent, as healers often claim. This emotional and spiritual attitude that is freely spoken of can in itself be the source, consciously or unconsciously, of spiritual pride, which was addressed in the Bible as "Luciferian".
An old Trappist monk, Padre Amabile, whom I had known for a long time in Italy and France, once commented to my belief that the monastery was an oasis for the body and soul, which I ought to forget this vision. There was in the monastery a rampant source of pride through which the monks tried to "out good" one another in an effort to be more worthy in their own ways.
The herb called “humility” was grown everywhere, but often denied watering.
Amrit Gaswami, the Hindu Physicist, would know about this, because he has read the Sutras of Patangiali. In the Sutras, an ancient sage describes how the attachment to psychic phenomena may arouse in the practitioner a sense of great accomplishment and supernatural gifts of which he feels very proud.
Those very feelings are none other than an ego trip that shall prevent us to further explore and feel our true spirituality, which is really about letting go of ego triumphs. It is my belief that we are personally responsible for their use and should not invoke the power of God, however you define this ultimate creative entity, as a being of love because the same creative agent is also responsible for creating tsunamis, maladies, earthquakes, and the death of living creatures.
Let us not invoke a good God who heals when summoned to do so.  Also let us not invoke a Satanist god who kills (as in voodoo) when summoned to do so.
At this moment I shall not go into what my personal view of “God" is, but manipulation of a supreme creator appears very Satanic!  Goethe writes about this at length in his Faust.
Let us not go back into exorcisms; the Middle-Ages and the contemporary psych wards. All these forms of reality did and do indeed exist showing the great aspects and powers of the human mind.  Let us allow to use any possibility of scientific inquiry into this phenomena so that we can separate them from subliminal interventions by outside entities, god, devil and, why not, extraterrestrials.
Posted by Fiammetta Rubin N.D. at 9:01 AM No comments:

A sense of time is important for me, not because astrology is for me a soft science, but because life itself is about time. Time is life whether it is past, present or future.
From my website, rubinartrstudios.com, you shall notice my education, my presentation to a public for decades through my art, my activities as a medicine person, and now, as a writer.
The writer in me is very old. There are: poems written about a cat “Topaziurca” when I was 7 years old, a play written at 12, and more “stuff” later, intermittently as life wavered itself along various pathways.
The question is, why NOW?
The answer is because NOW is the time for doing it.
At 75 years of age none of us can look forward to half a century more of life, nor to a quarter of a century… that is unless one lives in a stress free world, has excellent community support, great genes and imagination to create a future for one which has relevance to oneself and others.
The imagination is there, the genes are questionable and so is the support. Reacting to stress is up to me as how to wing it. At times I feel it is worthwhile to keep going at other times living feels like a load made for Sisyphus, something one keeps losing down the slopes and needs picking up once again every new day. Surely most of you know about the unevenness of life.  Taking responsibility for it does not apply to unforeseen circumstances, but as to how we feel about them.  Yes. It is possible to change our attitudes, our feelings, but it is not easy and may require training with professionals. Most of us neither have the time nor the desire for it. Therefore, we just "schlep around" waiting for something to happen.
It usually does.
This “blog” is such a happening.  The thought of my “living” on the Internet might have been completely absurd ten years ago when I could barely type a word on a computer board. It took writing 1,200 titles for my photos of flowers in order to become able to type, not rapidly, but decently.
There is obviously a coordination problem at play. It did show it when I was told to learn to play the piano. I could not play without looking at the keys, my own fingers, and the score at the same time. It became so frustrating after two years of lessons and practicing one hour a day that I pulled over one of the shutters in the living room in my grandmother's house in Rome, placed my right hand fingers in the space between where the shutters folded and bingo!  I pulled hard with my left arm and jammed my fingers between the shutters: done.
Soon they all turned dark, then very dark at the tips. I was taken to a doctor who, having been an army doctor during WW1, simply pulled the nails off while I was slightly jumping up and down to divert the attention while my Mother was aghast.  No, anesthetic was not used. Perhaps it was my first act of self-hypnosis. I was 13 years old. A possible career as a pianist abruptly ended. I was relieved.
Yes, I am still uncoordinated. My brain is just wired that way, but it also has good things going for it.  Things started happening to me as a young child, around 8 or 9 years of age. Strange things started happening, like sudden clairaudience about aspects of my future.  As time went on other portals of experience opened up, always suddenly, without previous training. A thousand years ago these incidents might have me designated as a witch or as some other very unusual person, short of the village idiot in a Jewish Schtatdel. I was raised as a Roman Catholic and kept all unusual events to myself until the ripe age of about forty when I happened to find out that there were many other people as strange as I was, and furthermore, they were not strange at all!
In this blog, I shall start conveying some of my early life experiences while attempting to show the environment and the roots of such unusual life developments. Perhaps I will parcel these stories into weekly segments. There may be someone reading it and posting comments. There may be no one now. Whatever happens is just fine, because I shall proceed weekly to add another segment to the blog.  This is easy because I have already written about the historical and psychological environment into which I emerged at 8:30 AM unto a whitish kitchen marble table in the apartment of my grandmother Zaira, in Rome.
The process of writing an autobiography started 30 years ago when Martin Ebon (go on Google to learn more about him) suggested that I write about the anomalous and spiritual experiences in my life. Then, I was unable to do this in the first person, as he wished me to do, because many people I would have written about were still alive. That is not the case now.
Regardless of the privilege of any writer to write about anyone as long as it is not malicious, my regard for privacy of others needs to be compassionately shielded. My decision to go public in writing about my own life took some thirty years of gestation, and it is obviously related to my own age. If you have a message, get it out while you still have the capacity to do so.
This is the end of first installment.  I am inviting my readers to comment.  Thank you for your attention, Fiammetta.
Posted by Fiammetta Rubin N.D. at 8:10 AM 3 comments: